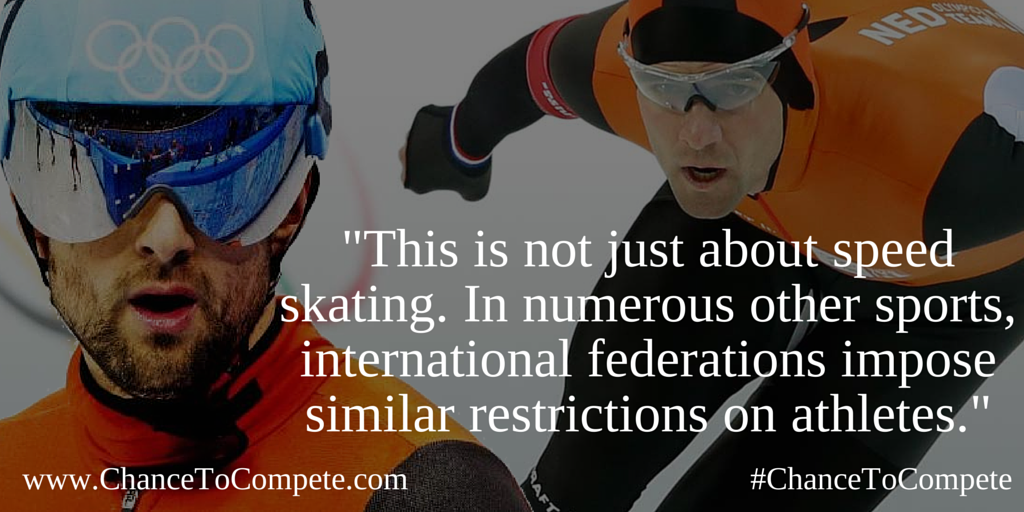 The EU Athletes’ statement on the European Commission’s Statement of Objections in the antitrust investigation on the ISU Eligibility rules.

The European Commission has released its preliminary view that the ISU (International Skating Union) rules, under which athletes face severe penalties for participation in unauthorised speed skating events, are in breach of EU antitrust law. The Commission’s concerns are outlined in a Statement of Objections addressed to the ISU on the 27th of September 2016 (http://europa.eu/rapid/press-release_IP-16-3201_en.htm).

This decision is related to the proceeding opened in October 2015, following a complaint filed by two Dutch speed skaters: Mark Tuitert and Neils Kerstholt. They challenged the ISUeligibility rules, which impose a life-time ban on skaters from international speed skating events such as the Olympic Games or the World Championship, if they participate in competitions which were not approved by the ISU.

EU Athletes has been supporting Mark and Niels’ courageous legal battle, with the #ChanceToCompete campaign and several letters sent to the Commissioner Margrethe Vestager. We had also formally expressed the views of the European athletes on the case in the course of the investigation as this is a case that has wider implications for all professional athletes.

Today, we welcome the Commission’s opinion that the rules unduly restrict the athletes’ commercial freedom to exercise their profession and result in a situation where they cannot participate in speed skating events other than those organise by the ISU or national skating federations. The system was judged disproportionately punitive and the ISU Eligibility rules may breach Article 101 of the TFEU (Treaty on the Functioning of the European Union) that prohibits anticompetitive practices.

Despite the on-going lobbying for exemptions from the Olympic movement, sporting rules are subject to EU antitrust law when the body setting the rules or the companies and persons affected by the rules are engaged in an economic activity. The ISU is the only body recognised by the International Olympic Committee (IOC) to administer the sports of figure skating and speed skating on ice. It is a monopoly and athletes, player associations and the European Commission are concerned that it is abusing its dominant position to restrict the market of organizing the competitions. This is not unique to ice skating and is also an issue in other international federations. The unfair and restrictive eligibility rules are not only a breach of the antitrust law, but also constitute a discriminatory treatment of athletes. The sportsmen and women must have the same rights and freedoms guaranteed when it comes to exercise of their profession and making their living as any other European worker.

“Challenging your own sport federation, which is supposed to support and help athletes, is not easy. The federations have a dominant position, which puts an athlete under a lot of pressure and can have negative consequences on their career. Mark and Niels have taken a great risk filing the complaint against the ISU rules. We greatly admire their determination and desire to improve the working prospects of thousands of professional European athletes”.

The ISU has already published a statement (http://www.isu.org/en/news-and-events/news/2016/09/ec-antitrust-allegations-are-unfounded) claiming that the European Commission’s decision is unfunded and that “a neoliberal and deregulated approach to sport could destroy the Olympic values underpinning sport”.

EU Athletes is looking forward to the final decision and hopes that this development will be a step forward to improve the sport governance and the situation of the professional athletes in Europe.

The European Elite Athletes Association is a federation of independent athletes associations from all over Europe with member associations from 15 European countries representing over 25,000 professional athletes, in sports such as basketball, cricket, Gaelic sports, handball, ice hockey, rugby, volleyball and others.